Abstract: Nekoyume is a decentralized blockchain technology-based massively multiplayer online role-playing game (MMORPG). In Nekoyume, a large number of users can hunt virtual monsters to gain experience, collect essential in-game items from adventures, and become stronger. The action information of the game is recorded in a blockchain ledger, thereby enabling several users to participate without the requirement for a centralized server. In this work, we design a separate random consensus, called Hash random, to implement the game on the blockchain. Hash random is a random consensus obtained by combining the block hash, which is created by the proof of work, and the hash value of the individual action. Hash random minimizes the intentions of specific stakeholders, and is deterministic by each behavior.

Bitcoin, proposed by Satoshi Nakamoto, introduced the concept of blockchain, which applied techniques such as digital signature, hashing, and proof of work, to create a public ledger. Blockchain has demonstrated that the decentralized main net is stable for nine years and that anyone can participate in the creation of a trustworthy virtual currency. 1 The vision of this trusted technology has also inspired several software projects. At present, blockchain technology is being implemented in applications that go beyond cryptocurrency. Vitalik Buterin further developed the bitcoin script to propose Ethereum, which is a decentralized application platform based on Turing complete Smart Contract. 2

In the efforts to create a wide variety of applications for blockchain, several researches attempted to develop games. For example, CryptoKitties, is an online game where users can send and receive randomly generated cats. The enthusiastic response received almost paralyzed the Ethereum network temporarily 3. However, since the use of random consensus on the blockchain is limited, there are several limitations to the games that can be implemented at present. If a more general-purpose random number generation approach is developed, users will be able to create and develop several different types of gaming applications using blockchain technology.

One of the major limitations of Blockchain is that the data on the chain and its execution result must be deterministic because of the nature of everyone sharing the ledger and same effect. In other words, it is not possible to use a typical random value in an application on the blockchain, because all the users will be able to view different values ​​based on the same data. However, several famous games, including Tetris, have random elements; therefore, implementing games on a blockchain without any restrictions is a significant limitation. To that end, there have been studies on pseudo-random number generation (PRNG) on blockchains to make blockchains more universal.

As regards the implementation, the use of block values for random generation is relatively simple. However, the miner can edit all the block variables, and therefore, it is not suitable for blockchains where the miner and the user are the same entity. 4

Random generation using external services enables the complete concealment of random generation. However, because it is not a decentralized approach, it may lead to trust issues. 5

Thus, the random generation method proposed in this work has the disadvantage that it can intentionally intervene in a particular group. Just as dealers should not manipulate odds at a casino, randomness must be created fairly by minimizing the likelihood of intentional involvement of specific user interests. To address this problem, Nekoyume proposes a random generation method called Hash random.

Hash random is designed to prevent stakeholders from attempting to generate an intentional number, in a way that would be detrimental to the interests of other users. To this end, we present two fundamental concepts.

3.1. Combination of behavior information from hash value and block hash¶

The hash value derived from a user's behavior information contains the signature of the user; therefore, it prevents the miner from intentionally transforming the hash value. The block hash is a value created by the miner. Therefore, the user cannot deliberately intervene in the generation of the block hash. Using the values ​​of the two hash values ​​XORed as a random seed, (1) the user cannot intervene on random values, and (2) all user actions in one block can be based on individual random seeds.

3.2. Behavior information that can be included in a block Time limit¶

Nekoyume is a massively multiplayer online role-playing game (MMORPG) based on blockchain, which is regarded as the first game to incorporate the concept of Hash random. Users take on the role of adventure seekers, who venture and trade in the world of games, or become cats who can navigate blocks that are key to the game's progress.

Because Nekoyume is an MMORPG based on a blockchain, there is no centralized server for a particular subject, which has the following advantages.

The following figure illustrates the various elements shared by Nekoyume's cats and adventurers. 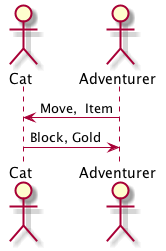 Adventurers can set their own jobs, take an adventure, grow in-game items and experience, and grow stronger. The player can perform the following actions in Nekoyume.

Combats monsters from the current area.

Players can acquire various in-game items through the adventure. However, since gold is only available through transactions, the players are required undertake adventures and obtain items through battles against stronger monsters, enabling the players to receive a lot of gold in the market.

The life cycle of the adventurer has been adopted from the Dungeon World rule. Dungeon World is a fantasy tabletop role-playing game (TRPG) based on Apocalypse World Engine and Dungeons & Dragons by Sage LaTorra and Adam Koebel. Since Dungeon World inherits the characteristics of TRPG, where player interactions are very important, it is suitable for the application of blockchain involving multiple users. Moreover, since all of the user's actions are designed to be judged by rolling a hexahedral dice twice, it is suitable to use random element.

In order for a decentralized community to be sustainable, an economic structure is needed that can reasonably balance production and consumption. Gold is the main virtual currency of Nekoyume, which publishes and exchanges, gives consumers a pleasant game experience, and producers receive reasonable rewards for their contributions.

Adventurers can use gold to enjoy a more pleasant and fast gaming experience. Typically, the following benefits exist.

In May 2018, Nekoyume Gold (NYG), which is available on the mainnet, will be issued in the form of the Ethereum ERC20 token. We will issue 21% of the total volume. In this minting, we achieve two objectives.

After launching the mainnet, you can obtain gold by providing a client based on the published code or creating a block by executing $ neko. It will be the largest of all rewards portions and will be the only way to earn Gold from 2019 on. The planned amounts over four years are as follows.

Hash random is a random consensus that minimizes stakeholder intervention on the blockchain; however, it suffers from the following limitations.

Hash random eliminates room for user intervention and has added constraints over random intervention. This enables the miner to benefit significantly from proof-of-work, which does not intentionally involve random results. However, if the miner stands to gain a sufficiently large reward that offsets the structural damage, the miner may attempt to create a deliberate hash despite the constraints. Therefore, even if Hash random is used, it is necessary to design the system such that excessive compensation is not provided at random.

Hash random is designed on the assumption that it should be used with proof-of-work. The use of Hash random is not suited to ecosystems using that use proof-of-stake or other consensus methods because certain stakeholders can easily intervene at random.

Nekoyume proposed and implemented a new random consensus, called Hash random, by combining the existing Bitcoin and Ethereum consensus systems to develop a decentralized MMORPG. In this article, we have summarized the difference between the random generation method and Hash random in the existing blockchain. In addition, we also discussed the scope for Nekoyume’s further development. Hash random should be used with the proof-of-work consensus, and it will work as intended. Therefore, even if Hash random is used, the system must avoid providing heavy compensation to random values.